How do I get rid of beetles in my house? 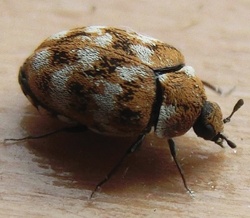 Carpet beetles are the most common household beetle, there are dozens of commonly found household beetles. Usually found in either contaminated foodstuff such as grains flour and rice, or on other organic matter including carpets, textiles, birds nests, and food debris. The key to achieving control of carpet beetles is correct identification, location of and removal of the source followed by an application of a suitable insecticide.

Carpet beetles cause considerable damage to goods and products and should be dealt with swiftly. The larvae from carpet beetles will feed on almost anything although seems to prefer woollen products, carpets, hair and cereals although its favourite food is insects and spiders. If grazing on fabric they will leave holes in the material. The eggs hatch in seventeen or eighteen days.

Development time from egg to adult usually requires two hundred and forty nine to three hundred and fifty four days at room temperature, but may take as long as two to three years depending upon temperature and food. Adult carpet beetle males live for thirteen to twenty eight days, whereas female carpet beetles live for fourteen to one hundred and forty four days. Control of carpet beetles is simple and involves physical removal with the aid of a vacuum of visible insects followed by the application of a residual insecticide.

The Biscuit Beetle will eat any number of household food items including hair, leather and unfortunately priceless museum pieces. Preferred items to consume appear to be bread products, cereals and spices. They will also eat paper and will feed off books if they are available. Control of biscuit beetles involves removing any infested product, cleaning areas where food debris has built up followed by the application of a suitable insecticide.

Furniture Beetles, also known as woodworm, are a wood boring beetle and they will cause large amounts of damage if they are not treated. To treat them effectively requires extensive training and knowledge as if not treated correctly it can cause more damage to the item which has been treated. Woodworm are noticeable due to bore holes which they leave but the bore holes may not develop until years after the area has been infected. Control of woodworm is best left to a specialist timber preservation company.

If you have an infestation of Flour beetles any flour that they have infested will have a bad smell and taste to it, although it will not cause you any harm. Flour beetles will not just infest flour they will also eat nuts, beans, chocolate, milk and insects. A Confused Flour Beetle female can lay up to five hundred eggs on food or in any cracks or crevices that they come into contact with. The eggs are clear, white and sticky. The female can live for for up to three years. If conditions are right you can have up to five generations of flour beetles in a year. Control of flour beetles involves removing any infested product followed by the application of a suitable insecticide.

The mealworm beetle lays eggs on food, laying an average of around two hundred and seventy eggs each. The time to grow from egg to adult takes up to around six hundred days. An adult will live for up to three months. You may notice yellow mealworms in grain which usually indicates a hygiene problem. Mealworms like to live in dark and damp environments and can typically be found in grain and feed stores. Control of mealworm beetles involves removing any infested product, cleaning areas where food debris has built up followed by the application of a suitable insecticide.

Fur beetles as with many other stored product insects are usually found in undisturbed areas such as under carpets edges or under skirting boards. Birds nests are another place where fur beetles are often found. Damage to your clothing and other textiles may be caused by the beetle larvae. Control of fur beetles involves removing any infested product, cleaning areas where food debris has built up followed by the application of a suitable insecticide.